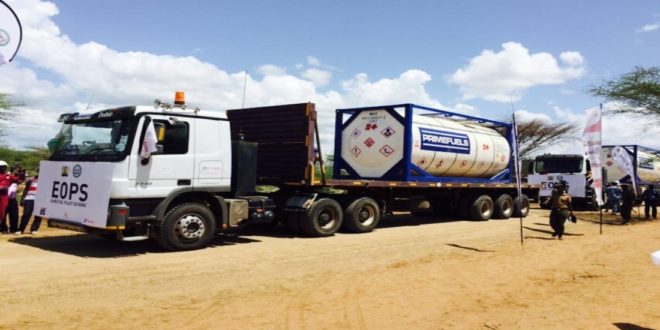 A truck loaded with crude oil en route to Mombasa from the oilfields in South Lokichar.

Kenya has joined the league of Africa oil exporters after its first consignment of 200,000 barrels fetched $12 million on Thursday afternoon.

That means the sweet light crude sold at $60 per barrel, an uptick of nearly 40 per cent above the $43 per barrel that the government had set as the break-even point for the Early Oil Pilot Scheme.

President Uhuru Kenyatta announced the breakthrough on twitter with a concise message: “We are now an oil exporter.”

He expressed confidence that the oil trade would help grow the economy and end poverty.

“So, I think we have started the journey and it is up to us to ensure that those resources are put to the best use to make our country both prosperous and to ensure we eliminate poverty,” said President Kenyatta.

The oil production statistics were disclosed by London-based Tullow Oil, which has exploration and oilfields in Turkana.