China’s CNOOC says it aims to take a stake in Ugandan oil pipeline. 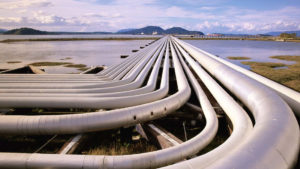 Uganda discovered crude oil reserve about 13 years ago but commercial production has been delayed partly because of a lack of infrastructure, such as an export pipeline.

Total has previously said it was interested in financing the pipeline. Tanzania and Uganda are both expected to take stakes.

About two thirds of the pipeline’s cost will be financed by debt and a Ugandan unit of South Africa’s Standard Bank Group and Japan’s Sumitomo Mitsui Banking Corp are jointly helping to raise the credit.

Ugandan officials have said the government is now aiming to have commercial crude product starting 2022.

Government geologists estimated the country’s reserves, in the Albertine rift basin near the border with Democratic Republic of Congo at 6 billion barrels.

Bukenya said CNOOC also planned to produce gas and use some of it to generate up to 42 megawatts of electricity for the company’s use and for the national grid.