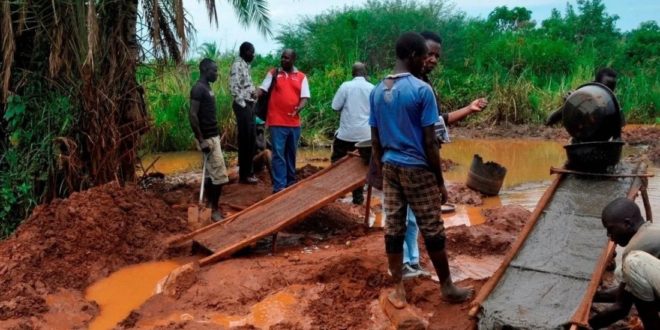 Across Western Kenya, over 95 per cent of gold mining is unregulated, with corruption, political interference and bureaucracy rife.

A trip to the Chamber of Mines to seek a licence is hell on earth for investors.

Failure by the government to regulate artisanal gold mining has hindered not only controlling the spread of Covid-19 but also revenue collection.

Khalif ‘Calaph’ Hassan, a trader, shared his frustrations. “As we speak, I have tried to get a licence for over 18 months. It is like walking through a revolving door.”

Calaph, who runs two firms investing in gold in Nyatike subcounty, said he has been sued many times either by politicians or groups with vested interests, hindering his access to the licence.

“Mining in Kenya has a huge potential, but licensing is hard to come by. That has opened loopholes,” Calaph said.

While local artisanal miners have been struggling to get by, international companies have been having it easier.

The last licensed mining in Ikolomani was done by colonialists before independence and lasted 17 years. Records show about 655,000 tonnes of ore was mined, which produced 259,142 ounces of gold, with an estimated value of Sh4 billion.

Hudson Vumiliva, a gold miner with two local companies, said while the news gave them hope, it showed how getting a licence for artisanal miners has been hard.

“No prospecting licence and right can overrun another, so we have lost hope of getting one as locals. We will only mine in the periphery of existing mines,” Vumiliva said.

Faisal Salah, a miner who managed to get a licence from the Chamber of Mining and was to pay Sh500,000 annual fee, had to shelve the idea.

“The fee was high, and even when you are licensed, it does not protect you from political interference, harassment by police and other government officers. I stopped investing in gold,” Salah said.

Maurice Amalembe, a geology officer, said the government is yet to issue any mining licence in Migori county, and all those involved in the activity are doing so illegally.

He said in September last year a multi-agency team led a major crackdown on illegal miners, where over 40 gold mining firms were closed.

“We have a stipulation to allow for artisanal miners, but others are illegal,” he said.

He said Migori this year has five licensed gold traders and buyers who buy from dealers, and only two licensed carbon elusion centres to purify gold at low scale.

But a gold smuggler through Mwanza, Tanzania, and Entebbe, Uganda, who only identified himself as CM, said it is easier to sell gold outside the country than in Kenya, making the country lose billions in revenue.

“What is making the process harder is that we don’t have a gold purifying place in Migori. Most chemicals used in mining like mercury and cynide are also illegal,” he said.

CM says it is easier to move with a gold bar worth Sh10 million to be smuggled out, especially in a public vehicle, than to declare it in Nairobi.

“It is bad because the environment is degraded in Kenya, while Tanzania and Uganda end up getting taxes as we pass the gold as if it is mined in those countries,” CM said.

The scope of what Kenya loses was highlighted when one gold export company, Ushindi Limited, was found to have evaded declaring taxes worth Sh1.6 billion.

In a statement dated March 25, the Kenya Revenue Authority said investigations in company’s finances in the 2010-11 Financial Year found it made gold exports worth Sh2.5 billion in 2010 and Sh2.9 billion in 2011.

The exporter failed to comply with a law under the Trading in Unwrought Precious Metal Act section 11. This law requires details of date, quantity and identity of buyer and sellers when gold and other precious metals are bought.

The exporter argued they bought directly from artisanal miners, who refused to give such details as they are not regulated.