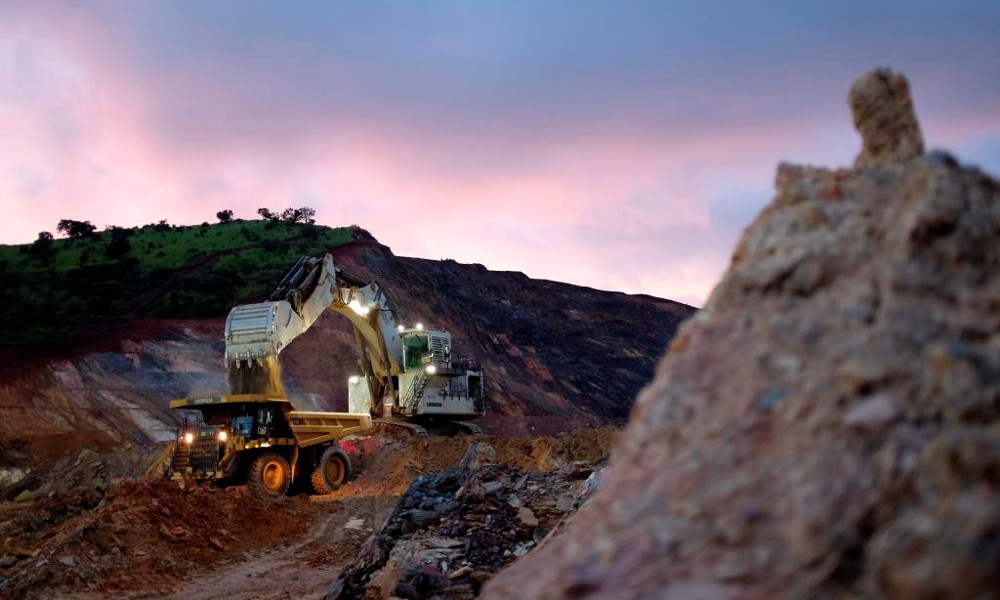 EAM News March 31, 2017 International, News Comments Off on Secret of the Kibali mine – flying people in and gold bars out 1,039 Views

Randgold Resources had to haul heavy equipment more than 1 000 miles to build the roads and hydropower plants needed to construct its Kibali gold mine, the biggest in Democratic Republic of Congo.

The sprawling facility in a remote corner of a country the size of Western Europe is a high-tech operation. In one tunnel deep underground, a $1.3-million, 68-metric-ton remote-controlled digger heaves ore out of a cavernous blast hole. The ventilation system hums as 50-ton loads are slowly humped along the 3-kilometer (2-mile) track back to the surface.

The best-performing gold miner of the past decade, Randgold has built its success on getting complicated projects like Kibali into production on time and within budget. It’s the third major mine the company has brought on stream in five years, and it has indeed been a gold mine: It accounts for about a fifth of the company’s production, which tripled between 2010 and 2015 as revenue doubled to more than $1-billion.

Now, with Kibali nearing full production and no new discoveries since 2011 the miner needs to find guaranteed output growth to impress investors wary of the shrinking pool of large-scale deposits.

“They’ve done this a long time and they know they need to re-shine the halo,” said Clive Burstow, who helps manage about $475-million of natural-resource assets at London’s Baring Asset Management, including Randgold shares. “I certainly wouldn’t bet against them finding something, but don’t forget it’s getting harder to find these big elephant-sized deposits they talk about.”

The key to making Kibali work: The company and its partners built everything in sight, including housing for more than 4 000 resettled families and an international airport where personnel fly in and gold bars fly out. At the high point of construction, Kibali received as many as 400 40-foot containers a week across the border from Uganda.

Everything from the plates and cutlery in the large canteen to a plant that processes as much as 7-million tons of ore a year has been driven in across more than 1 120 miles of road from either Mombasa, Kenya, or Dar es Salaam, Tanzania. Three hydropower projects will ultimately provide 42 megawatts of electricity to the mine.

One of the company’s new mines will be in Senegal, according to Randgold CEO Mark Bristow, who has promised the company, which is also exploring in Ivory Coast, will define three new projects in the next five years. Another may be in Congo, in an area next to Kibali: The Moku-Beverendi gold project, a joint venture with Moku Goldmines AG controlled by Israeli billionaire Dan Gertler.

We are looking for “world class 10-plus-million-ounce deposits,” Bristow said in Cape Town in February. “We think Moku has that potential.”

Moku is one of four joint ventures Randgold has signed in Congo in the past 18 months as it looks to replicate Kibali’s success.

A partnership between Randgold, AngloGold Ashanti and state-owned Sokimo, Kibali shipped 642,720 ounces of gold worth more than $700-million in 2015. That helped increase production of the precious metal in the country from almost nothing in 2011 to more than 25 tons a year.

Production last year fell to 585 946 ounces after technical challenges in the first six months, but output is scheduled to peak at 750 000 ounces in 2018 as the underground operation reaches full capacity, Randgold says.

Other miners have been less successful in Congo. Randgold’s partner, AngloGold, suspended operations in 2013 at the Mongbwalu project, also in northeastern Congo, saying that it couldn’t make the economics of the project work. In the past decade, mining majors Rio Tinto Group, BHP Billiton, Vale SA and De Beers have all held and abandoned mining licenses in Congo for different minerals without making headway.

Congo was ranked 184th out of 190 countries on the World Bank’s ease-of-doing business survey in 2016, but Randgold was able to bring Kibali from feasibility in 2010 to first gold less than four years later.

“It’s been way more successful than most people thought,” said Hunter Hillcoat, an analyst at Investec in London. “They operate their own little, dare I say, sovereign state, far removed from regional issues.”

Randgold began due diligence on Kibali in 2006, months after historic elections brought a final conclusion to a violent civil war that left-millions of Congolese dead. It acquired the asset in 2009 through a purchase of Moto Goldmines

“Before Moto every major gold company in the world had this asset and did nothing,” Willem Jacobs, chief operating officer for central and east Africa, said at the site in November. “It is very hard for big companies to do what we have done here.”

A new project would benefit from the infrastructure Randgold has built and the lessons the company has learned since 2009, making it easier to replicate Kibali’s success, Jacobs said. “Every country has its own challenges, but the Congolese government is enormously commercial,” he said of the complicated operating environment that many miners have failed to overcome. “You can always talk, you can always negotiate.”

Gold prices hit $1 257 on Feb. 27, well below a record high of $1 921.17 an ounce in 2011. Randgold, which says all of its mines make a profit at a price of $1 000, has avoided the worst of the slump so far: It has returned more than 500% to shareholders in the past decade. That’s more than double the second-best performer on the Bloomberg senior gold miner index and one of only six out of the 16 biggest gold members to have given shareholders positive returns over the period. Competitors AngloGold Ashanti, Barrick Gold Corp., Newmont Mining Corp. and Kinross Gold Corp. have all lost money for shareholders.

Its shares are up 14% this year alone.

“For a long time they were realistically one of the only invest-able gold names listed in London if you were a large-scale investor,” said Baring’s Burstow. That’s a title slowly coming under pressure from miners such as Acacia Mining and Centamin, Burstow says. “People have confidence that they can deliver. We just have to watch them carefully.