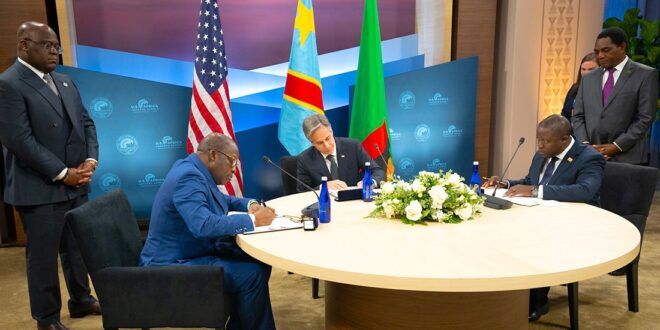 The United States of America’s Department of State released a signed Memorandum of Understanding (MoU) with the Democratic Republic of Congo (DRC) and Zambia on electric vehicle battery value chains. The document was signed on 13 December 2022, during the Africa Leaders Summit and states DRC and Zambia’s involvement in the production of Electric Vehicle batteries.

DRC currently holds a majority of the world’s cobalt reserves at around 70% with Zambia coming in second in Africa. Zambia is also the world’s 6th largest copper producer. The MoU is stated to be entrusting the 2 African countries to work on a value chain that covers mining all the way to assembly.

These projects will be operational within Africa and there is mention of enabling the private sector to also be invited to participate in each step of this venture. The US really needs this as it got left far behind in the EV race. China is producing 56% of the world’s supply of EV batteries with Korea coming in second at 26% and Japan with 10%. That’s 92% of the world’s supply of EV batteries coming from Asia alone.

The leading battery supplier, CATL, expanded its market share from 32% in 2021 to 34% in 2022. One-third of the world’s EV batteries come from the Chinese company.

The reason behind the push

Environmentalists are stating that the levels of pollution and greenhouse gases are currently at quite critical levels and in places like Europe, there have been strong measures put in place to try and curb this trend. The push for renewable and green forms of energy has been directed toward vehicle manufacturers with stiff penalties being charged to them if their fleet emissions exceed a stated value. According to the Environmental Protection Agency (EPA) transportation contributed to the majority of greenhouse gasses emitted in the US at 27%.

The European Union declared that vehicle manufacturers must stop producing internal combustion engine cars by 2035 which is in 12 years. So, the global fleet of cars will need to switch from petrol, diesel or hybrid to full electric. However, the supply of batteries to power these electric vehicles cannot adapt fast enough to the deadlines being placed by legislation. And since the US is lagging behind, it is seeing this as an opportunity to capitalize on this emerging new technology and the demands it is generating.

Why copper and cobalt specifically?

The battery’s performance is also dependent on its chemical makeup of it or which materials are used. The idea is we want a battery that supplies a lot of power and also provides enough capacity for a great range between charges. This also needs to be done safely, especially when recharging the battery using fast chargers. Generally, batteries tend to heat up when they are being charged and the faster we charge them the hotter they become. For a while, EVs were charging at a pace where it took between 8 and 12 hours to charge from zero to full. Nowadays it takes about 25 minutes to fully charge some EVs from zero.

How long does it take to charge a Tesla?

To ensure the battery does not overheat whilst being fed with over 250KW of power, cobalt was employed in the battery’s chemistry. It acts as a stabilizer when batteries are operating close to or at their limits to ensure that energy transfer in and out of the battery is done whilst keeping the temperatures relatively cool.

This factor also means that less active cooling is needed on the battery which further extends the battery life and consequently driving range compared to a battery of the same capacity that does not use Cobalt. The MoU also states that the EV battery value chain should employ ethical standards, a topic of contention when it comes to cobalt. The mining of this mineral is strongly associated with child labour issues in the DRC which is something the US wants to be wary of.