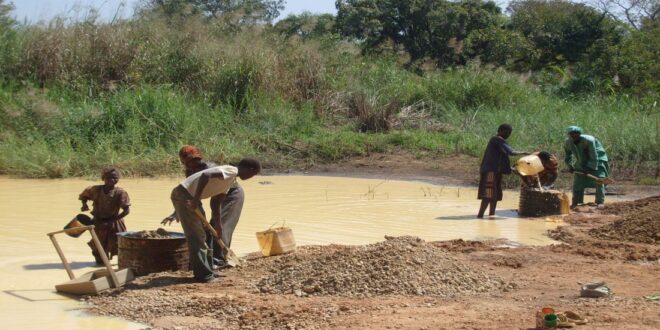 Minister advises Miners to work with villagers in their expansion initiatives

Minerals Deputy Minister Dr Stephen Kiruswa has directed the investor to ensure they get the approval of the villagers as they expand and change land use in the areas from pasture land to a mining field.

The government also ordered mining firms to adhere to the country’s mining laws and regulations, and as well observe environmental protection requirements to avoid conflicts with the locals.

Dr Kiruswa said by seeking the approval of Sinot villagers, will solve conflicts between the residents and the investor, adding that the government cares and respects investor(s), but it must protect its citizens. He further said that both parts must observe and honour the laid down procedures.

Elaborating, he commended the miner for improving road infrastructures in the village, including focusing on their water project, creating job opportunities and donating desks to local primary schools.

Dr Kiruswa noted that the government wants such kind of investors, who address the people’s challenges, adding that others should borrow a leaf from Paramount Ltd.

In a related development, the Deputy Minister directed Arusha Regional Mining Officer, Eng Alphonce Bikulanichi to work closely with Longido District Commissioner’s office to ensure safety in all the mines in the area.

He added: “I expect the mines to operate by the Mining Laws to avoid preventable disasters from occurring.”

Presiding over, the Mineral Commissioner from the Ministry of Mining, Abrahamu Mwanga, urged owners of the Paramount mining company to abide by mining laws and regulations, affirming that the government would always protect investors who operate by the country’s laws and consider the welfares of the surrounding communities.

Equally, he said the government would not disturb any investor who adheres to procedures, considers the wellbeing of the citizens and pays all taxes.

Mr Mwanga further said such investors would enjoy smooth operations and protection from the government, adding: “Minerals are a blessing from God, and if well managed, it will be a blessing to the country, and a curse if poorly managed.”

In response, the Director of Paramount Mine, Zainal Gurban pledged to honour the directives issued by the Deputy Minister, saying: “We have already conducted 11 village meetings and we shall continue doing that to ensure all community requirements are addressed for the benefit of both parts.”

On his part, Longido District Commissioner Nurdin Babu asked for collaboration between the Arusha regional office and his to enhance efficiency and supervision of the investor’s work, saying they should not only meet or communicate when calamities strike.