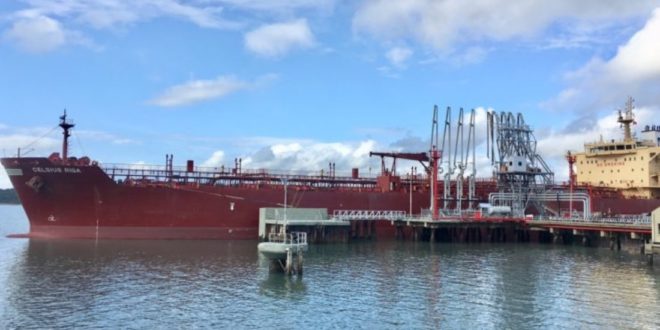 President Uhuru Kenyatta arrived at the port of Mombasa to flag off the inaugural shipment of Kenya’s crude oil on Monday.

The country will export 200,000 barrels of the Turkana crude marking its entry into the league of oil-exporting countries.

Celsius Riga, the vessel to ship Kenya’s crude oil at the port of Mombasa on August 26, 2019.

The oil is valued at Sh1.3 billion based on the international crude oil prices of about $63 (Sh6,500) per barrel.

The small-scale export is intended to test the international markets’ reception of Kenya’s low-sulphur oil ahead of commercial production, which is estimated to start in the second half of 2023.

Principal Secretaries Dr Julius Muia of National Treasury (left) and Petroleum’s Andrew Kamau at the port of Mombasa ahead of the flagging off of Kenya’s first crude oil shipment on August 26, 2019.

British oil explorer Tullow has been moving the crude by road to Mombasa. It started moving about 600 barrels per day (bpd), but raised the volume to 2,000 in May.

President Kenyatta announced on August 1 that Kenya had struck a deal with an oil exporter but did not disclose the buyer.