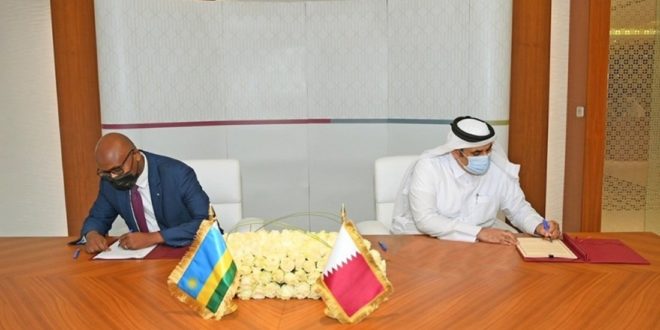 Rwanda is further developing economic relations with Qatar, this development has been bolstered by the two countries signing a Double Taxation Avoidance Agreement (DTAA) recently. The agreement aims to deepen economic cooperation between the two countries.

The Agreement shall specify the taxation rights of the Contracting States in respect of all types of revenue flows resulting from business activities and shall prevent double taxation of such revenue.

The treaty refers to citizens in the contracting states who are residents.

Speaking to media about what the country will benefit from the pact, Francois Nkulikiyimfura, Ambassador of Rwanda to the State of Qatar said that it is a stepping stone to existing economic cooperation between the two countries.

“The DTA Agreement will allow to further develop an economic relationship with Qatar, boost trade and investment flows between the two countries, and facilitate outbound investment by residents of both countries,” he told the media.

Besides the transfer of skills and technology between two countries that is likely to increase due to the latest development, according to Nkulikiyimfura, going forward, the treaty will also cement cooperation in tax matters.

“The agreement will ensure an effective and appropriate collection of taxes on income and prevent any fiscal evasion by sharing tax information with Qatar,” he noted.

So far, Rwanda has signed double tax avoidance treaties with 12 countries around the world, and there are five others under negotiations.

The latest DTAA with the Gulf State will become effective once ratified by both countries.

Following Monday’s signing ceremony, concerned ministries of both countries will present a detailed document of the agreement to their cabinet for approval and then to the parliament for review, a step after which the agreement will come into force.

The two countries currently cooperate in matters related to diplomacy, aviation, politics, agriculture, technology, mining, transport, and tourism among others.

The relations between Rwanda and Qatar has been among others enhanced by the exchange of visits between President Paul Kagame and His Highness Sheikh Tamim Bin Hamad.

Months later, Rwanda opened its Embassy in Qatar and so did the latter